I-45 and Other Most Dangerous Roads in Houston 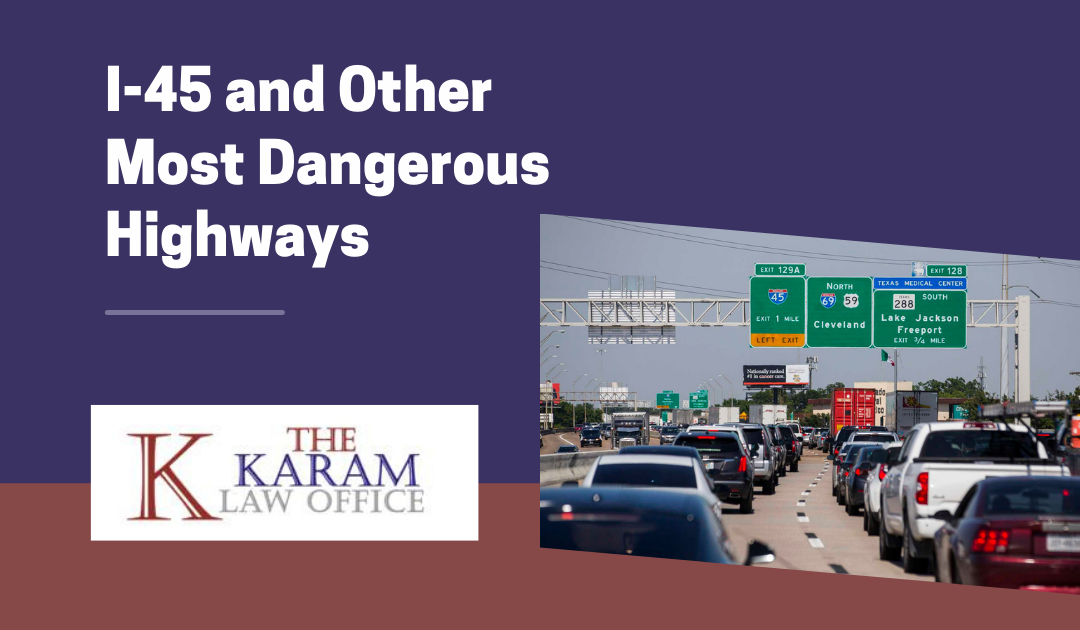 The Houston metroplex has some of the most congested roads in America. From The Woodlands to Sugar Land to Baytown, the area is home to millions of people, the 2nd largest port in the country, and some of the most dangerous roads in Texas. Thousands of people are injured or killed on these roadways each year.

At The Karam Law Office, we provide dedicated representation for individuals who have been injured in car accidents. Our lawyers have recovered millions on behalf of accident and injury victims in Sugar Land and throughout the state. If you or a loved one has been injured in a car accident, contact our office at (832) 859-8453 for a free, no-obligation consultation.

I-45: The Most Dangerous Highway in the U.S.

It is no surprise to Texans that Houston roadways are treacherous, but one highway has recently taken the title of Most Dangerous Highway in the U.S. As reported by Houstonia, I-45 took the title after averaging “56.5 fatal accidents for every 100 miles.” Houston’s stretch of I-45 is particularly dangerous, accounting for the most fatalities in 2019.

There are several contributing factors that make the road deadly, including congestion, reckless driving, and faulty infrastructure. The planned expansion of the highway has met several roadblocks, namely a federal lawsuit filed by Harris County against the Texas Department of Transportation to stop construction on new lanes.

A study by the Houston Chronicle found that Houston area roadways are some of the deadliest and most dangerous in the nation. On average, 640 people are killed on Houston roadways, and over 2,800 are seriously injured. The area leads the nation for fatal crashes involving drugs and alcohol and ranks second for fatal traffic accidents involving speed.

Dangerous highways and roadways in the Houston – Sugar Land area include:

Many car accidents are entirely preventable, involving operator error, inattention, or wrongdoing. If you are involved in an accident, it is important to get to safety as quickly as possible. Check for injuries and call 9-1-1 immediately after the crash.

Even if you do not believe that you were seriously hurt, you should still be evaluated by a doctor. Injuries may not be apparent for hours to days after the accident because of the sudden, unexpected impact.

In the 2020 Sugar Land State of Mobility report, the city conducted a crash analysis of all of the traffic accidents that occurred over a 5-year period. The study showed that nearly half of all Sugar Land crashes happened at intersections or were intersection-related.

Dangerous intersections in the Sugar Land area include:

In total, there were 9,975 crashes on Sugar Land roadways over the course of 5 years. Over 900 of those accidents occurred on the main lanes of IH-69 and SH-99. Of the total crashes, 47% happened at or near intersections.

Unsafe Intersections for Pedestrians and Bicyclists

In addition to motor vehicle occupants, pedestrians and bicyclists are at a high risk of injury or death at intersections throughout the city.

Some of the most dangerous intersections for pedestrians and bicyclists include:

Research shows that many of the crashes at intersections are caused by speeding, unsafe lane change, and a failure to obey traffic signals or stop signs.

Were you or a loved one injured in a Sugar Land car accident? Contact our office for a free consultation. Attorney Jacob Karam is an award-winning personal injury lawyer who has secured multiple 7-figure settlements and verdicts on behalf of his clients. Call The Karam Law Office today at (832) 859-8453 to get started.