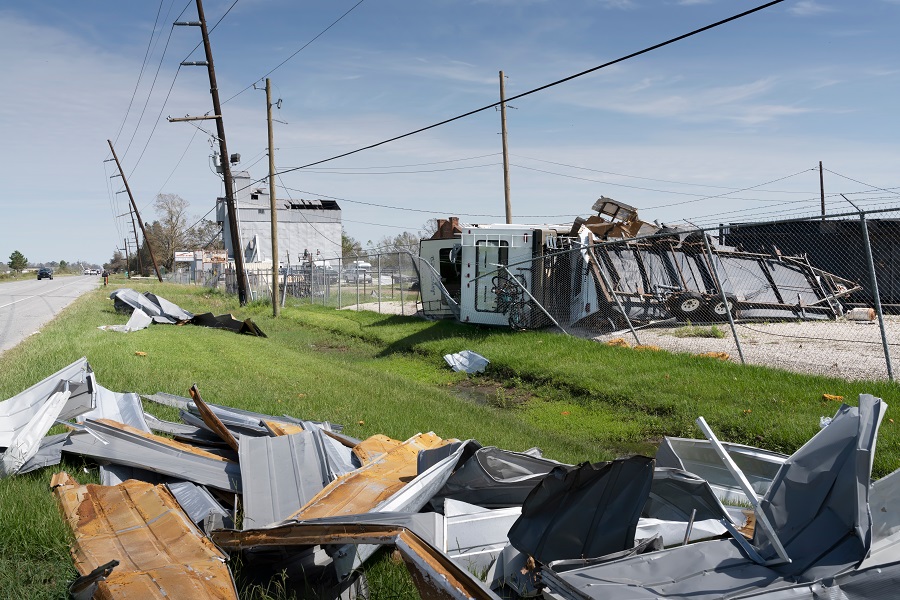 A mere six weeks after one of the strongest hurricanes in a century hit the coast of Louisiana, Hurricane Delta wreaked havoc. Early damage estimates from Hurricane Laura and Hurricane Delta are in the billions. The storms pummeled Southwest Louisiana, mangling homes and businesses along the way. Now thousands of people are left wondering how to get the repairs they need to their property.

At The Karam Law Office, we know the devastation that hurricanes can cause. Our attorneys know how crucial it is for insurance companies to act quickly, paying out valid claims so that people can start on the road to recovery. Unfortunately, this does not always happen when someone files a claim. If your first-party insurance claim has been denied, contact our office for a free consultation.

On August 27, 2020, Hurricane Laura made landfall in Cameron, Louisiana, as a Category 4 storm with sustained winds of 150 mph. The storm was the strongest in a century to hit the Louisiana coast. In a record-breaking year, Laura would still prove to be one of the deadliest and most destructive.

Along with intense winds and deadly flooding, Laura brought a catastrophic storm surge. Laura left thousands of people in shelters as their homes were ravaged in the storm. Preliminary damage estimates are between $4 billion and $12 billion, according to the Insurance Information Institute (III). Many project that losses will climb substantially higher given that the area was hit 43 days later by a second major hurricane.

In early October, Hurricane Delta became the earliest 25th named storm on record. Tragically, it made landfall on the battered Louisiana coastline where Laura had hammered only weeks earlier. Few had time to recover before Delta, a Category 2 hurricane at landfall, hit with dangerous amounts of rainfall and wind gusts of 100 mph.

Flooding from the storm would surpass that caused by Laura. Thousands of Southwest Louisiana residents were still displaced from Laura when Delta hit. Many businesses had yet to reopen their doors, and few people had returned to any sense of normalcy.

Being hit twice in such a short amount of time was simply unthinkable for most. III reports preliminary damage projections for Hurricane Delta as $1 to $3.5 billion.

How Homes and Businesses Were Affected by the Hurricanes

Hurricane Laura and Hurricane Delta affected both homes and businesses. Floodwaters left many properties uninhabitable. Hundreds of thousands were left without power causing food to spoil. Months after the storms, the damage to crops is still being calculated.

Businesses already suffering because of the pandemic were shuttered, some closing their doors indefinitely. Where there wasn’t complete property loss because of 100+ mph winds, roofs were caved in, or trees were toppled. Entire areas of Southwest Louisiana were flattened or completely flooded. Few homes and businesses were spared by the back-to-back storms that demolished Lake Charles and the surrounding areas.

Type of Damage Resulting from Hurricanes

Some of the most commonly reported damage from hurricanes include:

Insurance companies will try to reduce payouts claiming that damage was pre-existing or not a direct result of the hurricane. It is essential to know your rights and consult an attorney if you are not being offered a fair amount based on your losses.

Recovering Through an Insurance Provider

As we discussed in the hours leading up to Laura’s calamitous landfall, insurance companies routinely deny claims after a hurricane. Despite knowing that hurricanes can do billions of dollars in damage, leaving Gulf Coast residents homeless or unable to do business, insurance companies will use ruthless tactics to downplay losses.

In order to receive compensation for your hurricane-related losses, you may need legal representation. At The Karam Law Office, we are accepting Southwest Louisiana first-party insurance cases related to the devastation caused by Hurricane Laura and Hurricane Delta. If your home or business was damaged in the storms and you were denied coverage or given less than your claim was worth, call our office to speak with an attorney.

What Is a First-Party Insurance Claim?

When you file a claim with your insurance company, you are filing a first-party insurance claim. A lender will likely require you to have insurance on any property that you own. When you purchase insurance on your home or business, you do so expecting that they will cover your losses when there is an act of God or a natural disaster.

It is only when disaster strikes that you find out what your insurance carrier will and will not cover. If your claim is denied in bad faith, you have the right to pursue legal action. Our Southwest Louisiana first-party insurance claim attorneys can help you understand your rights and pursue litigation against unscrupulous insurance companies who deny valid claims.

If you have provided satisfactory proof of loss and your claim has not been paid within 30 days, contact our office to speak directly with an attorney.

It is always in your best interest to contact our office as soon as possible. It is important to remember that an insurance agent is not your legal representative and may not have your best interest at heart. When you retain our office, we can represent you in your first-party insurance claim and may be able to cover your legal costs and expenses to ensure that you are made whole and do not have to pay legal fees out of your settlement.

Know Your Rights After a Hurricane

It should never take years to recover money for property damage after a hurricane. Insurance is there to protect homeowners and business owners from the destruction caused by natural disasters. It is crucial that you know your rights and fight to receive the recovery you need to be made whole again.

If you have storm damage and have not yet filed a claim, the Louisiana Department of Insurance recommends policyholders:

If you have filed a storm damage claim and your coverage was denied, an insurance agent never responded, or you were given an unfair settlement, contact our office to discuss your legal options.

Insurance companies routinely look to limit their exposure in storm-related or disaster-related claims. They may deny your coverage, stating that you have reached your policy limits or that the type of damage you experienced is not covered. One of the most common types of damage after a hurricane is to a roof. Insurance companies deny thousands of claims stating that roof-damage was pre-existing and not caused by the hurricane.

Other tactics include delaying their response or offering you a settlement that is far less than your claim is worth. Insurance is there to protect consumers in the event that something beyond their control happens. When insurance companies refuse to pay out on valid claims, they must be held accountable.

Call our office today if your insurance claim has been denied or you have been offered an amount that does not cover your damages. We are now accepting Southwest Louisiana first-party insurance claims.

We are here for you. 2020 had a record-breaking thirty named storms. According to III, an average hurricane season has twelve. Of the thirty named storms this year, thirteen became hurricanes, and three became major Category 3 or stronger hurricanes. Unfortunately, researchers predict that these types of storms and seasons may only get worse.

Insurance companies must be held accountable. At The Karam Law Office, we represent people in Texas and Louisiana in first-party insurance claims. We can help you get the compensation you need for losses related to Hurricane Laura and Hurricane Delta.

If you feel like your insurance company is not paying a fair amount for your property damage claim, contact The Karam Law Office at (281) 302-5272.