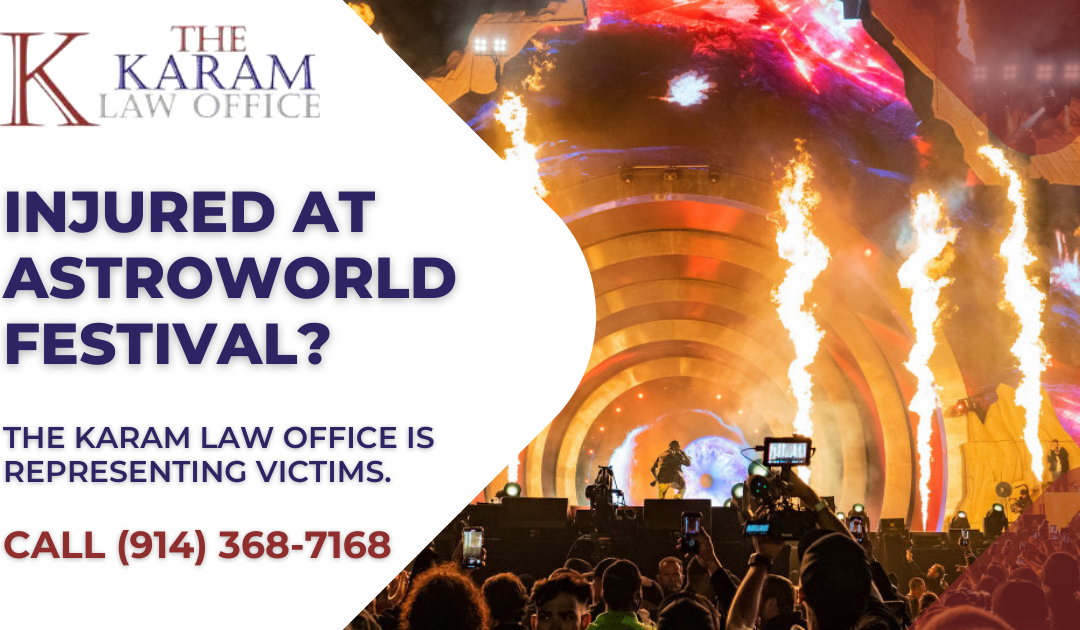 The Karam Law Office is currently representing multiple victims from this tragic incident. If you have been injured at this event or know anyone who has, please contact us: (914) 368-7168.

As a countdown timer ticked down the minutes until Travis Scott took the stage, the nearly 50,000 person crowd began to push forward. Within minutes of the performer starting his set, concertgoers were crushed by the deadly surge. The chaotic scene would ultimately claim eight lives and injure hundreds.

Jacob Karam and the Karam Law Office offer their condolences, thoughts, and prayers for the families of those killed and injured at this tragic event. If you were injured or lost a loved one, please contact the firm at (914) 368-7168 to discuss your legal options, as the Karam Law Office investigates liability for this tragedy.

A Terrible Loss of Young Lives

According to ABC 13 News, victims who lost their lives during the Astroworld Festival disaster included two teenagers, a 14-year-old ninth-grader and a 16-year-old junior from a local high school. Two 21-year-olds and two 23-year-olds were also killed. The oldest victim was 27, who reportedly died while trying to save his fiance from being crushed.

In-depth reporting by CNN indicates that the horrific turn of events resulted in the hospitalization of a 10-year-old who remained in critical condition as of Saturday. Several attendees fell unconscious, and nearly a dozen went into cardiac arrest. Law enforcement also stated that there were multiple incidents where a drug used to treat narcotic overdoses had to be administered.

The cause of the fatal surge remains unknown. Attendees report that the rush toward the front began in the countdown leading up to Scott taking the stage.

Social media and news reports indicate that Scott continued his performance, pausing briefly as an ambulance made its way through the crowded audience. The performer would ultimately stop the show a total of three times but would reportedly go on to complete his set.

As his performance started, audience members screamed for help, losing air and becoming trapped by the tens of thousands of people rushing forward. It would take over 20 minutes before medical personnel could reach those injured and even longer before the concert would be ended by law enforcement.

In 2019, three people were trampled as attendees of the Astroworld Festival rushed to enter the event. Only hours before the deadly surge at this year’s event, one person was injured as people rushed a VIP entrance at the event.

Festivalgoers that had attended the event in previous years told CNN that crowd surges of this magnitude are not unusual when Scott takes the stage. Thousands of people push towards the front creating a dangerous, potentially life-threatening situation for everyone involved.

Injured in the Astroworld Festival Disaster?

The Karam Law Office will continue to investigate the tragedy that unfolded at the Astroworld Festival this year. If you were in attendance at the event and were injured or have lost a loved one, please contact our office immediately at (914) 368-7168.

An investigation into this horrific scene may find that these deaths and injuries were preventable. We are here to help in any way that we can. Our legal team is dedicated to providing unparalleled support and representation to injury victims and their families. Call today to get started.