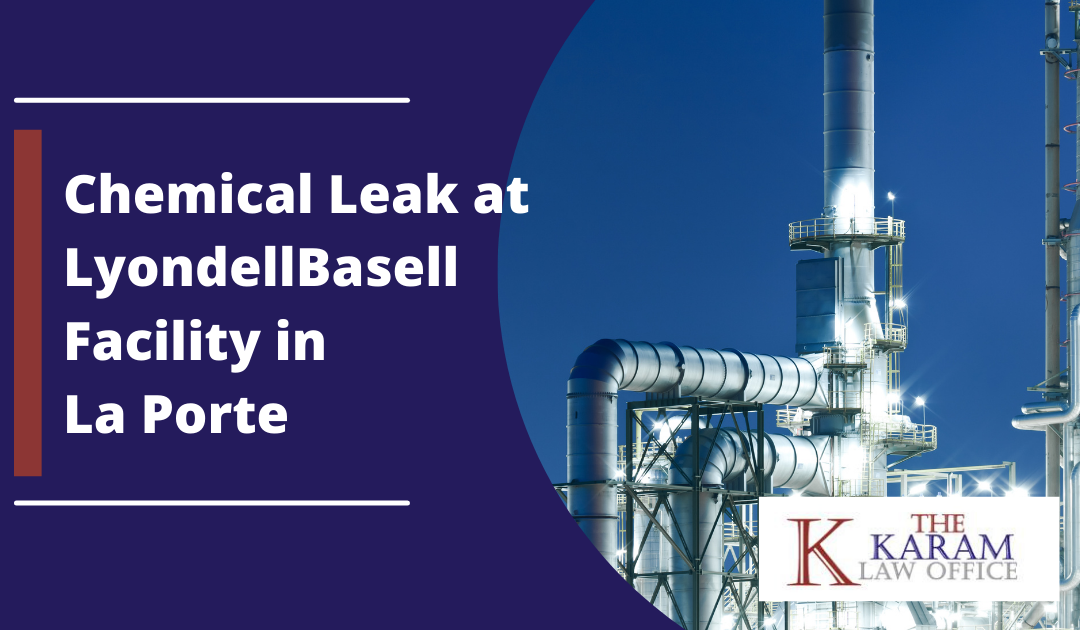 Two people were killed, and dozens have been injured in a chemical leak at the LyondellBasell Facility in La Porte, Texas. Approximately 100,000 pounds of acetic acid was released in the fatal incident, which also caused devastating burn-related injuries and respiratory complications to dozens of workers.

At the Karam Law Office, we provide dedicated representation for individuals who have been injured or killed in chemical leaks in Houston and throughout Texas. If you or a loved one were injured in the LyondellBasell chemical leak or a similar disaster, contact our office for a free consultation. Call (914) 368-7168 to speak directly with award-winning Attorney Jacob Karam.

According to a news conference about the incident, representatives for the LyondellBasell Industries La Porte Complex reported a leak that occurred inside the acetyls unit off of Miller Cut-Off Road at just after 7:30 pm, Tuesday night. Officials indicated that the unit had been partially shut down to undergo planned maintenance. The two workers succumbed to their injuries, dying at the complex.

The leak is believed to have been caused by a line holding acetic acid that was pressurized. The fatal chemical leak was a mixture of “catalyst, acetic acid, methyl iodide, and hydrogen iodide,” as reported in a statement released by the Texas Commission on Environmental Quality. The leak resulted in a large vapor cloud that affected all employees at the site.

In addition to the two contractors that tragically lost their lives in the chemical plant accident, 30 workers were injured. Injuries ranged in severity from minor to critical, with several being treated at Houston Methodist Clear Lake Hospital. Injuries included burns, skin damage, and respiratory issues.

Several regulatory agencies are investigating the disaster. At the press conference, company officials indicated that they were working on decontamination as they looked into the cause of the leak. The acid is reportedly used in food-grade vinegar but can lead to serious injuries if swallowed and is toxic if inhaled.

While the cause of the fatal leak is currently under investigation, many chemical plant incidents are the result of negligence or gross negligence. A failure to follow proper safety protocols can risk the lives of workers on-site and people in the surrounding community.

It is imperative to hold companies accountable for their wrongdoing. If you or a loved one has been affected by the LyondellBasell chemical leak, contact Attorney Jacob Karam immediately to discuss your legal options.

Obtaining Compensation for Your Injuries

When a company fails to provide a safe work environment for its employees, they must be held liable for deaths and injuries that result from their negligence. Call the Karam Law Office at (914) 368-7168 for a free, confidential consultation.

Attorney Karam is a fierce, passionate advocate for injury victims and their families. He has recovered millions of dollars and verdicts and settlements, going up against some of the largest companies and insurers in the state. Contact our office today if you have been affected by the catastrophic chemical leak at LyondellBasell or a similar incident.